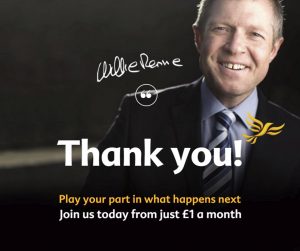 “I want to thank the 1.6 million people in Scotland who voted to remain in the European Union. We lost that campaign, it was a bitter blow, but we are fighting back.

Liberal Democrats are the biggest and best force to keep the United Kingdom in the European Union. So you should join our Party to make that happen.

So many thousands of people have already. I want you to do that too.”